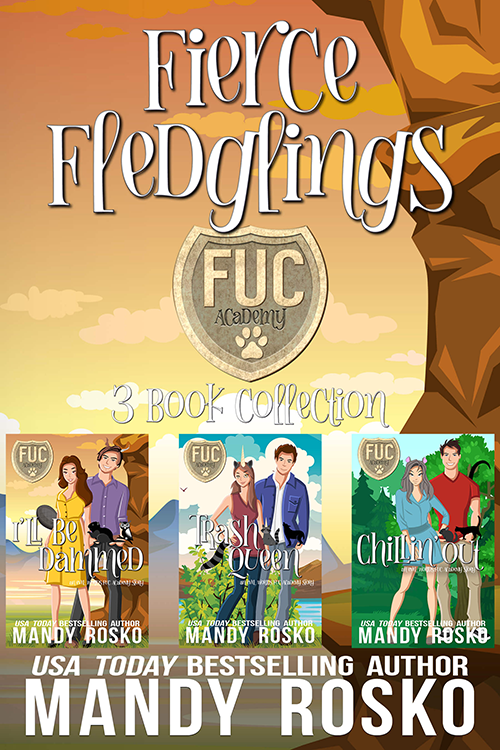 In these three books by Mandy Rosko, a mysterious villain and her snake son are stirring up trouble around the Furry United Coalition Newbie Academy, but a menagerie of FUC agents will stop at nothing to thwart them, and protect the ones they love!

Albert makes Beverly feel safe, though she has no memory of her mate or her life before he found her stuck in her beaver form and building a damn in the wilderness outside. Someone had kidnapped her and done freaky science things to her, and she wants answers. She wants someone arrested.

Though, she's not opposed to hitting the sack a few times with her mate while she waits, because when a beaver wants something, she gets it.

Will the racoon take the wolf's treat?

FUCN'A won't release Trisha into "normal" society until she's able to hide the large horn protruding from her forehead. That's fine, there's plenty to keep her entertained as she roots through classroom trash bins, breaks into the cafeteria for midnight snacks, and accepts dares to pickpocket the new security guard.

Whoops. That last one has some unintended consequences when he apprehends her and captures her heart in the process.

Can a chinchilla and cat find common ground?

Charlie's been rescued and brought to FUCN'A, but she wishes she could remember her life before the lab. Especially when a cobra shows up in her room, and turns into a man claiming they used to have a life together.

Chinchillas mate for life, so wouldn't she know if she was meant to be with him? Especially since she's pretty sure she' supposed to be with a certain cat—the new and overly protective FUCN'A security guard!