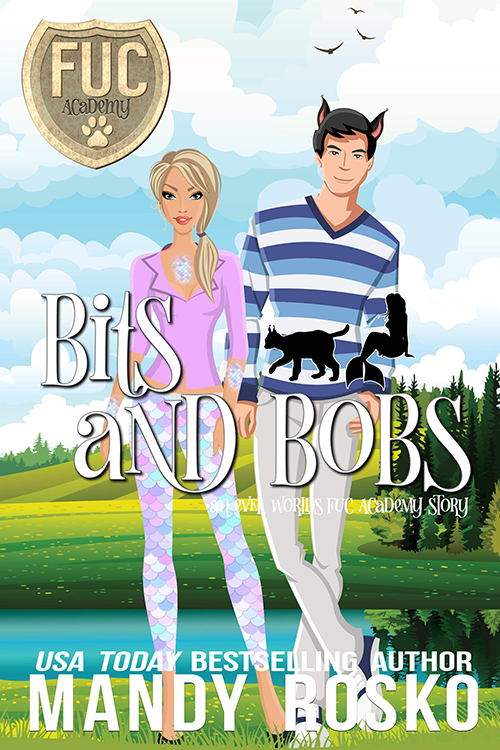 A cat, a fish, and an evil bird all meet up at a lake…

Steve’s little trip to BC to help his brother turned into more than he bargained for when a strange bird-woman abducted him. Now all of a sudden he can turn into some kind of cat… what?!!

Cindy’s been stuck as a rescued resident at the Furry United Coalition Newbie Academy. The kind agents managed to save her from the lab, but they’ve had no luck reversing whatever experiment gave her permanent gills, rainbow scales, and webbed fingers.

Her roommates have all found love and moved on from the Academy, but Cindy’s lost hope on that ever happening for her. Until she meets Steve. He sees past her abnormalities. In fact, he thinks she looks like a beautiful mermaid.

Can it be true? Does Cindy finally have a chance at a happily ever after? Or will the evil bird-woman ruin it all when she comes to collect her chicks?

Bits and Bobs is part of Eve Langlais’ Furry United Coaltion Newbie Academy (F.U.C.N.’A.)  EveL Worlds and is available on all platforms!

Note: This book is a standalone, but it is connected to Mandy’s other FUCN’A stories, I’ll Be Dammed (Albert and Beverley's story), Trash Queen (Warren and Trisha’s story), and Chillin' Out (Sam and Charlie's story)